The CS86-BOX-10210U is a rugged, high-quality, multifunctional industrial PC. Thanks to the integrated brackets and its lightweight construction, it can be firmly attached to any flat surface, such as industrial cabinets or walls.

The Intel® Core™ i5 10210U with 4GB DDR4L RAM (expandable up to 16GB) and 32GB mSATA SSD (expandable up to 512GB) power the CS86-BOX-10210U, making it ideal for any application. It features a broad range of connectivity options, allowing it to meet even the most demanding requirements in harsh industrial or outdoor environments.
The connectivity includes four USB 3.0 ports, two 1GB Ethernet ports, and two serial ports that can be either RS232 or RS485. The integrated HDMI connector supports an external HD monitor.
The wireless connectivity includes two optional modules: WiFi/BLE and 4G/LTE; both modules include the antenna.

The Intel® Core™ i5 10210U powers the CS86-BOX-10210U with 4GB DDR4L RAM (1 SO-DIMM DDR4L socket supports up to 16GB) and 32GB mSATA SSD (supports up to 512GB) to supply enough power and storage for any industrial application. Despite their cutting-edge performances, the offered CPUs consume very little power: their TDP is only 15W at respective base clock frequencies.

It features a broad range of connectivity options, including four USB 3.0 ports, two RJ45 LAN ports (GbE Intel® I211) with WoL support, two 2×9-pin D-Sub connectors, which can be configured as either RS232 or RS485 communication interfaces, and one HDMI connector that supports an external HD monitor.

It supports two optional wireless modules that add WiFi/BLE and 4G/LTE; both modules include the antenna. 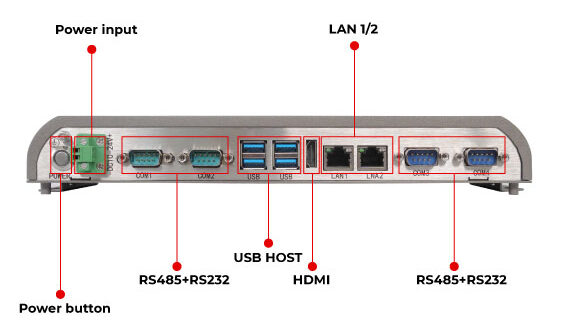 The CS86-BOX-10210U, thanks to the Intel i5 processor, gives multiple OS choices. We offer Ubuntu preinstalled, but you can choose to get Debian or Windows 10; you can select while ordering, and we will install it for you.

We have developed all the needed drivers, so every hardware feature is readily available for any standard development tool. If your project requires an OS that is not on the list, please contact us, and we’ll make a customized version that suits your needs.

If you choose Windows 10, an additional license cost will be added to the product’s price. Page load link
We use cookies to ensure that we give you the best experience on our website. If you continue to use this site we will assume that you are happy with it. For more information please refer to our privacy policy. Ok
Go to Top